What to wear at a Woman’s Suffrage Parade

Visit WSCSC founding member and co-author of Reflecting Freedom: How Fashion mirrored the Struggle for Women’s Rights, Kathy DeHerrera’s video on what to wear to a suffrage parade.

In honor of the Centennial of National Woman’s Suffrage (27 years after Colorado Women got the vote!) we are marching (sort of) in a parade.   Our participation in the State Fair Parade will be going online.  View our virtual parade on YouTube.

Hear the story of Carrie Clyde Holly, the first woman in any state legislature in United States – and maybe in the history of the world – to draft a bill that became a law through her determination and hard work as a state representative. We explore her efforts in the face of overwhelming opposition. See women gather at her feet as she argues for the importance of her bill in saving young women from loss of virtue. Listen to snarky men upset that women are serving in the legislature. We will look at her life in the context of the revolutionary era of the nineteenth century. How did she get to Colorado? What kinds of laws did she try to pass? What did she do when her term of office had expired? How did she combine motherhood with her labors outside the home? How important were her efforts in the ongoing struggle of voting and other rights? Join us to explore the life and labors of this American first.

The Pueblo Heritage Museum hosts the Drive “Past” Suffrage Parade in honor of the centennial of National Women’s Suffrage (for Colorado it was almost 127 years).  Local, statewide, and national suffragists made an appearance, and WSCSC founding members Leslie Cates and Louise Berg talked about their suffrage ancestors.  The event was covered by KOAA News5, FOX21News, and the Pueblo Chieftain.

“Resolved, By the House of Representatives, the Senate concurring, that we congratulate the people of California and New York upon the opportunity now to be given them to adopt an amendment to their constitution recognizing woman’s natural right to exercise the elective franchise, and we trust they will follow the wise example of the people of this Centennial State, and that the righteous cause of equal suffrage and of equal rights now attracting general attention, will speedily be ratified in all the states of this glorious Union.”

The tribute is presented to WSCSC on July 20, 2020 (172 years to the day after the first public reading of the Declaration of sentiments) by the Honorable Bri Buentello on the steps of the Old Pueblo County Courthouse where Carrie Clyde Holly used to practice law. 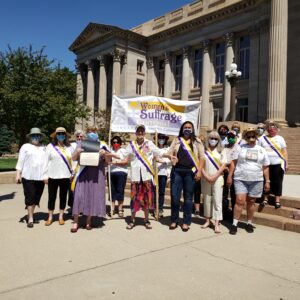 Enjoy a lovely tea while entertained by the story of Carrie Clyde Holly, the Pueblo woman who, with two from Denver, were the first women in America elected to serve as state legislators. Tea, drama, rent-a-hat, elegance, and mischief. 48 tickets per seating, $20 each, at Pueblo Heritage Museum, 719-295-1517. Event co-hosted by the Pueblo Heritage Museum, the League of Women Voters of Pueblo and the Women’s Suffrage Centennial Southern Colorado.

Kathy DeHerrera presents a talk on why suffrage happened in the western United States before other regions.  The audience is then invited to visit the newly created Women’s Suffrage Exhibit (August 2019-August 2020) at the Pueblo Heritage Museum.  The exhibit was put together by Museum Director, Spencer Little, WSCSC founding members Tory Marquessen, Sheila D’Amico, and Debby Mulay.

WSCSC participates and joins with women in Pueblo County and beyond to march in celebration of women’s achievements and recognition of the ongoing work that must be done.

We’d like to thank everyone who was able to join us for the celebration of Women’s Suffrage.  A grand (and educational time) was had by all.  We celebrated 125 years of Colorado women having the vote.

6:30-7:00 PM
We collected and gathered stories of people in southern Colorado who worked for woman suffrage and/or equality.  People brought stories of ancestors.  All struggles for women’s equality count – even your own.  There were snacks and activities for all ages.7:00-8:00 PM
The story of the suffrage struggle from Colorado territory to the election of the first female state legislator (from Pueblo!!) in the year 1893 was presented with re-enactments and excerpts from the Chieftain and other Colorado newspapers.  We heard from suffragist Mary T. Shields, who spoke about suffrage so well in the town of Trinidad that the Spanish speaking audience asked her to stay and wait for a translator so they could better understand her arguments.