Contribute to Carrie Clyde Holly Statue (for research on CCH, see below)

The League of Women Voters of Pueblo is our Fiscal Agent. To contribute to the Carrie Clyde Holly statue via credit card, please visit the donate page of LWV-Pueblo. IMPORTANT: To ensure your contribution goes to the statue, you must include “CCH statue” in the comment section.

You may also send us a check, Email wscsco at gmail

The Women’s Suffrage Centennial of Southern Colorado (WSCSC) is raising funds to honor
Carrie Clyde Holly (1866-1943) with a statue in Pueblo, Colorado.

Why erect a statue?

Are you trying to learn about Carrie Clyde Holly? If so, you have come to the right place. Carrie Clyde Holly became one of the first three women to ever serve as a state Legislator in the United States. After women achieved the right to vote in Colorado in 1893, Carrie Clyde Holly, Frances S. Klock, and Clara Cressingham were elected to the House of the Colorado General Assembly in 1894 for the legislative session of 1895. 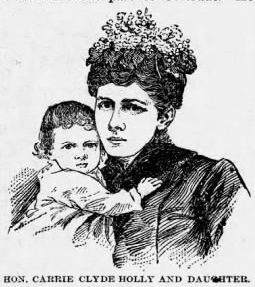 “An Amusing Story characteristic of the woman is told of her appearance at the first legislative session [January 2, 1895].  She arrived, accompanied by her husband and one child.  She was told at the member’s door that she might enter but that the other two members of her family must find seats elsewhere.  The little woman promptly demanded by what right several men were allowed to present their wives on the floor if she could not introduce her husband.  The doorkeeper succumbed helplessly, and Mrs. Holly scored her first point.” – page 3 of the Akron Daily Democrat, Akron, Ohio, February 27, 1895.

Some brief information about Carrie Clyde Holly. Feel free to print and use and share so long as you do not sell or make a profit from the material.

Link to the House Journal of General Assembly of the State of Colorado, tenth session, 1895, to read a report of the legislation and other official events that took place in the House during the legislative session. You can also find some of Holly’s activities in the “Crossing the Alps with Carrie Clyde Holly”

Dr. Gaughan’s Pecha Kucha, February 8, 2019. Special thanks to the Pueblo City and County Library District for hosting the event and for PPCLD’s Mike Pettigrew for videoing the event and sharing the video. Start at 7:02.