In 1939 Anderson had been denied a right to sing at Constitution Hall in Washington D.C. by  the Daughters of the American Revolution, provoking Eleanor Roosevelt to quit that organization and invite Anderson to sing at the Lincoln Memorial on Easter in front of an audience of 75,000 people.  She also sang at the inaugurations of Dwight Eisenhower and John F. Kennedy.

Read her obituary in the New York Times. 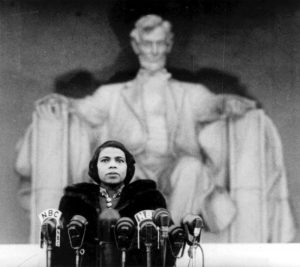